The LCD screen provides a good means of evaluating each shot while the camera is processing.

For best results with your equipment, experiment with different aperture and speed settings. Selecting OFF returns the camera to its automatic or manually set exposure. Automatic Changing Advanced Settings cont. 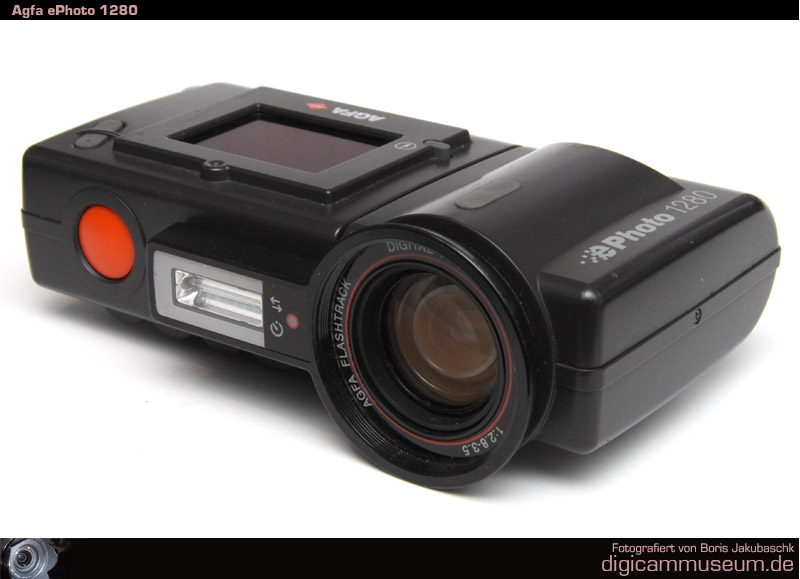 The underline moves to the next setting. Repeat the above two steps for all settings. To review the other stored images in succession: The LCD screen now displays 9 images with the current image highlighted by a white frame. Turn the EasyPilot button in either direction to highlight the images in succession. When you reach the last image on the screen, scrolling further adds a new row of images to the screen. All of these pictures were taken in the " HI" mode which is x with very low Agfa ePhoto 1280 Digital Camera compression. At this same camera store they have a big fish tank in the center of the store with an underwater camera in it.

I positioned myself so that the front glass door was behind the tank with the strong afternoon Florida sunlight coming in through it. I forced the flash off and took a hand held shot of the tank with the glare of the overhead flourescent lights bouncing off of the glass and the sunlight streaming in behind it.

I figured this shot would be a disaster at best right" light.

The results have been outstanding to say the least. I also did some handheld shots of the inside of my Pentium computer using the 's flash at a range of about three inches. I used the manual exposure control and set the aperture to "minimum" to both increase the depth of field and to limit the amount of light from the flash at Agfa ePhoto 1280 Digital Camera extremely close range. The pictures all came out perfectly exposed except for a few small and very shiny pieces of metal that reflected back into the camera - again I was totally amazed at the overall quality of the pictures. After leaving the camera store I went off to Dunedin Beach to get some sun-sand-water-boat shots but the sun ducked behind some clouds and stayed that way for the rest of the afternoon.

I went ahead and shot all kinds of beach and landscape scenes and they all looked good on the camera's LCD screen. Later at home these same shots all looked a little dim and had to be brightened by software. The underexposure was very consistent so it is easily corrected by using the EV overrides, that is what they are for, right? Battery life is still Agfa ePhoto 1280 Digital Camera problem as with all the LCD-only cameras.

I have 3 sets of NiMh plus Agfa ePhoto 1280 Digital Camera set of NiCd batteries so I don't really have the problem of running out of batteries in the middle of shooting but, changing the batteries is a bit of a hassle. The ePhoto 's battery compartment has all four cells laying side by side to keep the height of the body as slim as possible. They do have one of those pull-strap thingees under the batteries which makes lifting them up and out easier. I guess I got real spoiled by my Ricoh RDC-2 which has a little door you open and all four batteries fall out in your hand. This also puts a drain on the batteries plus my time as I'm used to Agfa ePhoto 1280 Digital Camera popping a memory card out and popping it into my PCMCIA drive and directly reading the image files. Not for much longer as Larry from Norman Camera emailed me tonight and told me he was sending my adapter out tomorrow yeah!

I am very impressed with the way the ePhoto works except in the bright sunlight. The camera still takes a great picture but the LCD screen is difficult to see to frame the shot.

I have learned that a good way to do this is to hold the camera slightly above eye level and tilt the LCD screen down and making it shade itself. Other Agfa ePhoto 1280 Digital Camera cameras with the screen fixed to the same camera body as the lens would not allow you to do this. I have noticed that the LCD image that is frozen on the screen while the camera is storing the image is not always a proper representation of the stored image. This is seen a lot in flash pictures where the frozen image appears to be over-exposed and on the bright side.

To make sure I flip it from Record to Playback mode and view the real stored image which looks properly exposed. After seeing it do this consistently I stopped playing back the stored images once I got used to the lighter "frozen" image. In addition, the ePhoto includes a superior high-resolution color LCD, providing crisp images for framing or playing back shots under any light conditions. So Agfa never really was a digital camera manufacturer. Even today, the ePhoto is a sophisticated digital camera and somehow seems.